Dr. Maria Montessori was an Italian scientist (1870-1952) whose name has now come to be inextricably linked to preschool education. Her experiments and observation of young children at the beginning of the twentieth century has radically changed the way we look at the child today.

Maria Montessori was born in a small town called Chiaravalle in the Province of Ancona on August 31, 1870.

The time of her birth was a time of great turmoil, of nationalist fervour and unity. New social influences were sweeping through the newly unified nation under a popular monarchy. The world of science in Europe was expanding in all directions. The internal organs of the opened human body were being studied. The layers of the earth were being excavated and laid bare. The structure of matter was being closely examined. Darwin had forced biology to a new frontier with the Origin of the Species. Machines driven by the power of coal and electricity were conquering the world. Society had changed forever and this had triggered the process of social and economic restructuring at every level. Western science was dealing with the truth of the physical world and this had forced close examination of theology and spiritual beliefs. New universal philosophies like Theosophy, Fabianism Free Masonry were beginning to embrace a wider vision of the struggle of humanity across time and space.

The young Maria’s parents were Alessandro Montessori, a civil servant and Renilde Stoppani, a well educated woman. The family moved to Rome when Maria was five years old. At the age of 16, she attended a technical school, with an unusual interest in engineering. Developing a keen interest in natural science Maria became determined to enter medical school. Overcoming many challenges both within the family and in wider society, in 1896 she became the first woman in Italy to qualify as a medical doctor.

As a doctor and an assistant in a psychiatric clinic, Maria Montessori visited asylums and came into contact with mentally retarded children. Within a short time she became co-director of the Orthophrenic School and became involved in the education of children with difficulties in learning. In the course of her pedagogical studies she became familiar with the ideas of Rousseau, Pestalozzi and Froebel. She was particularly interested in the work of two Frenchmen Jean-Marc Itard and Edouard Séguin. Emphasising the education of the senses, these scientists had spoken of the need to respect each individual child and of the importance of developing perceptual and motor skills.

At this time, construction began on a new development in San Lorenzo, a poor area in Rome. The children of the workers damaged and vandalized the building sites while their parents were at work. The developers persuaded Dr. Montessori to open a school to provide these children with some occupation. The casa dei bambini was opened on January 06, 1907.

The casa dei bambini employed no teacher, just the porter’s daughter, to take care of the entire group of around 40 children who had been gathered together. Dr. Montessori equipped the school with some of the materials she had used in her earlier work in the Orthophrenic school. The children were between 2½ to 6 years. Observing them, Dr. Montessori discovered that the children worked with the materials without being prompted and often exhibited signs of deep concentration. She came to realise that, if in a suitable environment which nurtured developmental laws, children educated themselves without being taught by a teacher. For children of this age who were in a mixed age community the environment was the teacher. The children in the casa dei bambini made extraordinary progress and the news of young children learning to write and read on their own brought Maria Montessori fame across the world.

Within a very short time, what began in San Lorenzo, now known as the Montessori method, spread rapidly. Dr. Montessori went on to declare that she had ‘discovered the child’ and glimpsed ‘the secret of childhood.’ The school attracted eminent visitors – royalty, statesmen and academicians. Mussolini became a prominent member of the Opera Nazionale Montessori in Rome. Many Montessori schools were set up. From then on Dr. Montessori’s life became dedicated to this educational experiment. She ran training courses for teachers from different parts of the world.

Those were difficult times in Europe. Dr. Montessori, first living through World War I bore witness to the rise of Fascism and Nazism. Dr. Montessori founded the Association Montessori Internationale (AMI) in 1929. The objective of the organisation – to uphold, propagate and further pedagogical principles and practice for the full development of the human being – represented her broad social mission and her belief in the freedom of the individual. Dr. Montessori believed that raising children in a harmonious environment prepared to fulfill their needs would create a better society and a better future. 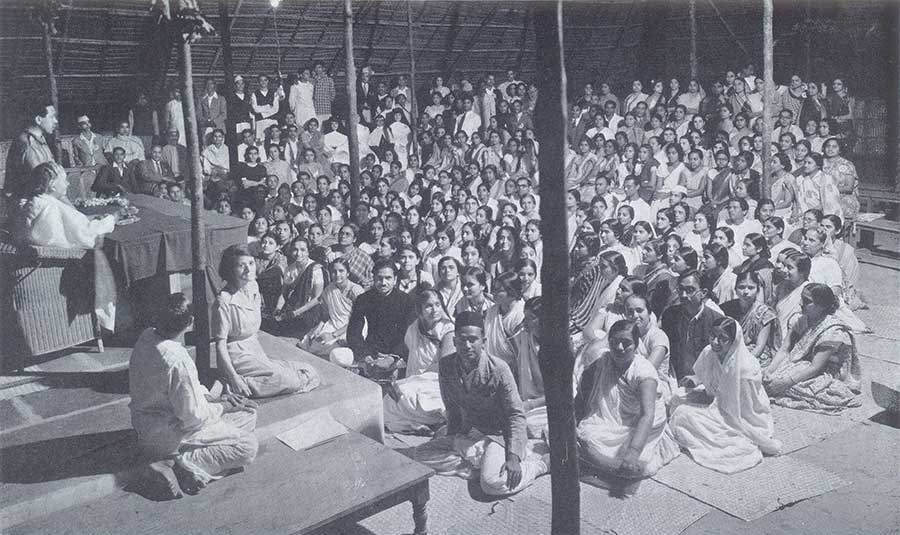 Dr. Montessori lecturing to the students of the first course at Adyar. A palm leaf lecture hall had to be built to accommodate the large number of students from all over India and abroad.

By 1933 Montessori schools were closed all over Europe and her effigy was burnt in Berlin. Montessori left Italy never to return and made her home in Netherlands. Peace and freedom took on a new and important meaning. To deliver the world from evil forces of war, the education of the young took on new relevance.

Through this time of political turmoil, Dr. Montessori, and her son Mario, began a life of travel. She travelled to England, America, India and all through Europe, giving lectures and courses. In 1949 she received her first nomination for the Nobel Peace Prize. On the May 6, 1952 she died peacefully in the Netherlands at the age of 82, bequeathing to her son the legacy of her work.

Today AMI centres throughout the world offer Montessori teacher training diploma courses recognised all over the world for their high theoretical standard and philosophical practice. AMI continues the work begun by Maria Montessori, heading a social and pedagogical movement which strives to uphold the rights of the children in society by helping the child to develop naturally in family and school and society.